Experiments in natural dyeing in a slow cooker

So a few weeks ago I decided to try some natural dyeing with some onion skins I had been saving but having asked my husband to go through the shed to find my dye pot and discovering it wasn't there I had to come up with a Plan B.  So Plan B involved a slow cooker which I had bought several months ago specifically for fabric dyeing.  I placed the onion skins, first batch were red, into the ceramic pot in the slow cooker and covered them with water and switched it onto high and left it for about an hour or so until the liquid gained a good colour. 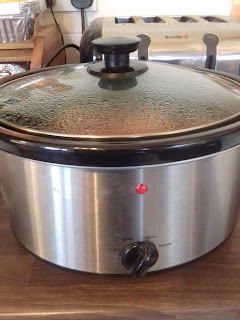 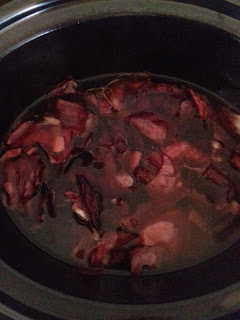 I strained off the liquid, putting the onion skins into the compost bin and returned the liquid to the slow cooker.  I then added some damp cotton, silk velvet, silk chiffon, muslin and a small skein of perle cotton and a small skein of wool, without any mordant.  I switched the slow cooker onto high and left them in there for about another hour, then switched the slow cooker off and left the fabrics in until the liquid was cold.  I then repeated the same experiment using yellow onion skins and a similar range of fabrics and threads. 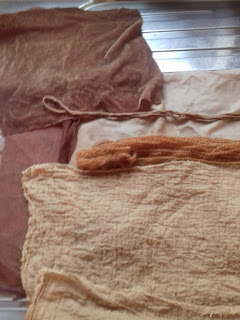 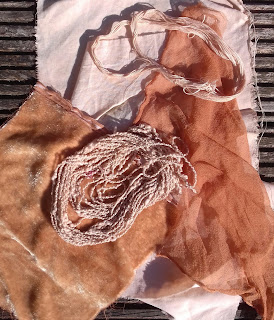 So, having had some success with the onion skins I looked at the vase of daffodils which were just starting to go over and decided to see if I could get any colour from them.  Having cut the heads off I placed them in the slow cooker and repeated the process used for the onion skins and once they had released enough colour the flowers went into the compost bin.  I then selected a similar range of fabrics and threads but this time added a couple of teaspoons of alum as I happened to have some in my stash.  I left the fabrics in with the slow cooker on high for about a couple of hours and then turned it off and left the fabrics in there until the liquid went cold. 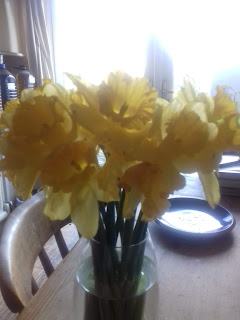 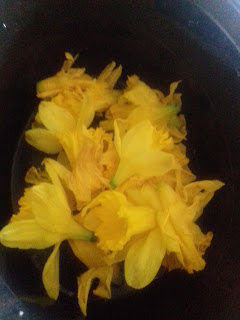 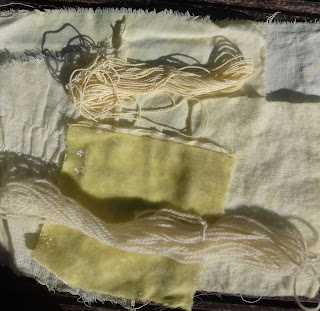 Well, considering I do not usually use natural dyes I am pleased with the results and will be trying other natural products to dye more fabrics.

Posted by Unknown at 13:08 No comments: Links to this post 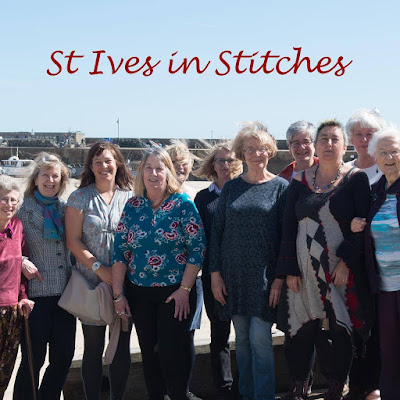 In September 2017 a group of people met with me to discuss an idea I had for a community project.  This was based on a project called High Street Stitch, lead by Lisa Hellier and was a stitched banner showing all the buildings on the high street in Crickhowell, Wales.

I thought we could do something similar with the buildings around the harbour here in St Ives, Cornwall and so the St Ives in Stitches banner began.

Each person taking part chose the building they wanted to represent and they were given a 10" square of calico as the backing fabric, the idea being that each piece would be exactly the same (but as is often the case the size of each piece tended to vary!).  The group met once a month in the Salvation Army Hall to collect material, look at each others work, get help when needed, but mostly to drink tea or coffee, eat cake and chat!

This project seemed to appeal to people from all parts of St Ives, of different generations and St Ives Guides became involved and worked on Smeaton's Pier.

Over the course of the year the group grew and included two sisters who had been born and brought up in St Ives whose family boat building business had been in one of the buildings shown along Wharf Road.  Some of the other people also had family connections to the building they chose, some because of a work connection and some simply because they liked the look of the building.

Every piece made and handed in was included in the banner as I know how important it was to each person who took part to see their piece in the completed banner.

We had decided to exhibit the banner during the 2018 St Ives September Festival and so began to put it together in August 2018, when it became apparent that this was going be larger than any of us realised as it turned into two banners, each about 25ft long!

When it came time to assemble the pieces onto the backing sheet we realised that they were going to have to be handstitched together and handstitched onto the backing sheet!  Thanks to a group of people willing to give up their time, and St Ives Library allowing us to use a room, free of charge. to lay the banners out, we got the banners ready for the September Festival.

The response we got from people viewing the banners during the Festival was better than I expected and showed seemed to inspire some people to create something similar where they live.

Thanks to Tony Mason of St Ives Videos and Leo Walker from LWalker Photography you can see a video called A Stitch in Time - Wharf Road Tapestry which shows some of the sessions putting the banner together and the banner on exhibition plus some of the buildings represented.

This project was completed without any funding apart from a donation by one of the members and being allowed to use the Salvation Army Hall each month free of charge.

We will be starting on Fore Street next month - on Wednesday 6th February at 10.30 am - and I know some changes I need to make as a result of completing the first banner and we are looking for funding for this project.  Andrew Mitchell, a local Councillor, has agreed to fund the cost of the Salvation Army Hall as this will not be free this time.

Never having undertaken anything like this before I have learned a lot and been delighted by the enthusiasm of all the people taking part.  St Ives Archive have provided a large number of photographs showing the changing use of the buildings in the past, which accompany the banners when they are on display.

Posted by Unknown at 14:57 No comments: Links to this post

Knit One Weave One Workshops 2019 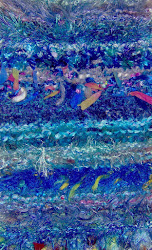 Knit One Weave One

Knit One Weave One Links